Fight for the Forgotten

You are here: Home1 / Women2 / Fight for the Forgotten

What is Fight for the Forgotten?

Justin Wren is fighting to empower those who don’t have a voice – From the forgotten people around the world affected by the water crisis in Congo, to the bullied in our own neighborhoods and schools.

In 2011 a journey of faith led Justin “The Big Pygmy” Wren deep into the Ituri rainforest of the Congo, and to the enslaved Mbuti Pygmy tribe, who referred to themselves as The Forgotten People.

Justin lived with the Pygmies for a full year, immersing himself in their culture and becoming part of their family. They gave him the name Eféosa, which means “The Man Who Loves Us.”

Justin Wren was bullied his entire life. But through the sport and martial art of wrestling, he found an outlet. The discipline and focus of the training, along with the support of his coaches and teammates, helped him to believe in himself, conquer depression, gain confidence, and find his tribe.

Today Justin is on a mission to tackle bullying through both awareness and prevention. He has partnered with Century Martial Arts to develop anti-bullying curriculum to be implemented in martial arts academies across the nation. He is also passionate about sharing his story with organizations, schools, academies and youth events in order to break the lifelong chains of bullying. 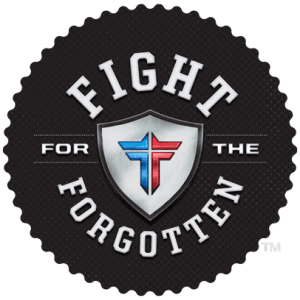 Be apart of the Connect Kindness movement. Bring attention to Fight for the Forgotten by sharing this page on your social media.

Donate money directly to Fight for the Forgotten.

Donate to Fight for the Forgotten

Make a difference by starting your own fundraiser for Fight for the Forgotten.